There are a few places to get excellent schnitzel in Leipzig, Germany. One is the classic Cafe Grundmann (previously reviewed on this site). The other is a sweet cafe that overlooks the lovely old stone square alongside St. Thomas Church, or Thomaskirche (www.thomaskirche.org). The Apothekenmuseum Cafe–I think the full name is “Restaurant im Apothekenmuseum”–sits on a great historical location. They have very good service and one of the best beers I had in Germany. Its name sadly eludes me, but as the distinctive glass (shown) pictures an evil villain along the likes of Sherlock Holmes’ mortal enemy Dr. Moriarty, you’ll find it.

The schnitzel at Restaurant im Apothekenmuseum is amazing. I think this schnitzel surpasses Cafe Grundmann (but Grundmann rules for atmosphere, as one of Europe’s truly great historical restaurants). It’s perfectly fried, crisp, and light. The potatoes are buttery, crisp, and tender, with nicely singed strips of onion between the slices. A good hearty salad and a giant pilsner for proper washing. The wide sprinkling of chopped parsley across the whole plate adds some energy and flair.

The cafe affords good people watching and a good spot for events that happen on the square during summer. Great beer, great schnitzel, great little cafe.

After a round-robin of German restaurants in San Francisco–heavy eating–Walzwerk laid down the best jager schnitzel I’ve had to date.  The schnitzel is perfectly seasoned in great batter, and the portions are Teutonic, titanic, huge. The spaetzle, a critical element on a schnitzel plate, is simply great.  And the creamy mushroom-onion gravy is fantastic. Amazingly, it’s just $15 at dinner, a terrific value.

The little German restaurant that could, Walzwerk, has a funky-cool interior that’s a paean to East Germany circa 1972. The bathroom has a tiny museum of Communist-era products in a see-through medicine cabinet; the main dining room has mod monochromatic portraits of the Communist Big Three: Marx, Engels, Lenin.Or is Engels Trotsky? Is it tongue-in-cheek or homage? A bit of both, I guess.

Because it’s fairly small, Walzwerk’s seating arrangements might require some wait time and beer so try for dinner on weeknights. But once your table opens up, you’ll probably have a great waitress who’ll get you what you need. Just make up your mind, pronto. Love this place and you should get your jager schnitzel on here. 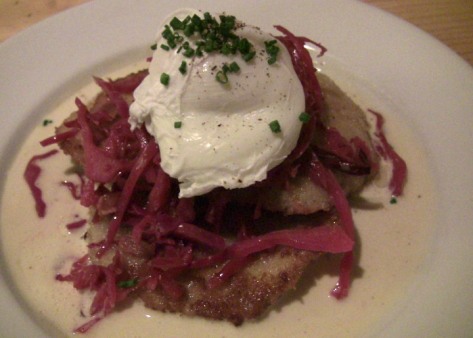 Chef Dennis Leary of Canteen is remarkably versatile, able to put out amazing dishes from many cultural sources. He’s played well with other culinary traditions beyond the usual French & Italian suspects, including Indian, British, and here in a pork schnitzel, German. Leary is more of an explorer in the kitchen, pitting his particular exploratory curiosity against classics and, occasionally, reinventing them.

Leary’s take on pork schnitzel is simple and fairly classic. Two large portions of pork loin have been pounded out to a medium thickness, and the lightly breaded covering honors the pork without overwhelming it. The schnitzel was perfectly tender and understated in flavor; quite nicely done.

A creamy English mustard sauce is the moat to the little food castle of pork schnitzel, crowned with a poached egg, red cabbage, and a wild dollop of sour cream. The cabbage was a bit al dente, leaving some original purple crunch. Because I’ve had so much overboiled red cabbage from here to Leipzig to Krakow, I enjoyed the texture of it, which balanced all the other softness present on the plate. Schnitzel’s not exactly home cooking for most of us, but with a nice rendition like this, it’s too bad it’s not served (at least at Canteen) a bit more often.

Be sure to check the Canteen website for the daily menu, because Canteen’s food offerings (12 per day) are constantly in flux.

With a most fantastic Art Deco interior, Café Grundmann is like a living museum. Nearly all of the 1920s furniture is intact, including wonderful old booths and tables hewn from elegant hardwoods. The giant, round light fixtures are perfect reproductions of the Art Deco style and, up near the entrance is an antique coin-operated machine that contains tiny art pieces made by students at the local art college. (It’s the kind of machine that used to house slices of cake and pie in the 1930s.)

The best schnitzel I’ve ever tasted is at one of the most wonderful—and authentic Art Deco—cafes in Europe, Café Grundmann in Leipzig Germany. It’s a generous portion of schnitzel with a light breaded exterior and juicy interior, coupled with a big, crisp salad and perfectly grilled potatoes and onions.

Nice to Meat You…delivering you the mightiest, meatiest dishes, vendors, events, and folks.